I have been honoured and excited to receive a grant from Severn Arts and Worcester County Council to complete some work for their Creative Connections initiative.

The Sketchbook Project is a series of visual diaries that I will create in this time of COVID19. The sketchbooks are to record happenings in my day-to-day life that occur as a direct result of the physical distancing and isolation restrictions that have been required of both myself and others around me.

Currently I have three sketchbooks in various stages of completion but the project could easily be extended to more.

On my first trip to the supermarket since the public isolation was announced I was informed that the first hour was for NHS and key workers, I hadn’t thought to check the website. I had no problem with this and this was my first encounter with shopping restrictions as I had refused to join the panic rush of previous days. The store personnel also informed me that only thirty people would be allowed in at any one time once the store opened to the public. I decided to wait, something I have never done before. After the wait I was first in the line to enter the store and the assistant invited me to choose a bunch of flowers as a free gift. I was delighted.

The Cottage Garden Bouquet sketchbook is a recording of that gift of flowers, their beauty representing the fact that it is possible, even in these times of ugliness, to be both surprised and flattered by an unexpected present.

The initial sketchbook is hand made using a concertina design. This has the ability to be used in a traditional sense, page by page, or using a number of pages together to create a long landscape. The completed sketchbook can also be flattened out to create a patchwork of images and an abstract design in itself.

Once a sketchbook is completed then an overall art piece can be made that represents the concept. The final piece for Cottage Garden Bouquet is shown below. 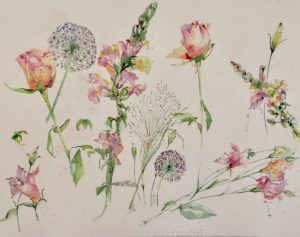 It is a large watercolour on Two Rivers 400gsm rough watercolour paper measuring 790 mm (31”) wide by 570 mm (22” high). In the piece I have taken specimens from the sketchbook effectively isolating them from the bunch, representative both of the fact that in isolation beauty can become more defined and simple pleasures remain in times of hardship.

The next Sketchbook Project is based on my near constant companion and confidant, Basil the terrier. I think dogs are actually enjoying this lockdown period!

Also the Sketchbook Project is really easy for anyone to take part in. All you need to do is record life as it is, for you, in isolation via photos, sketches, notes, anything you choose. Instructions for making a simple sketchbook, like the ones I am using, can be found at Making A Sketchbook but you can record on anything.

So to take part:

At the end of May I will try and bring everything together in some form.