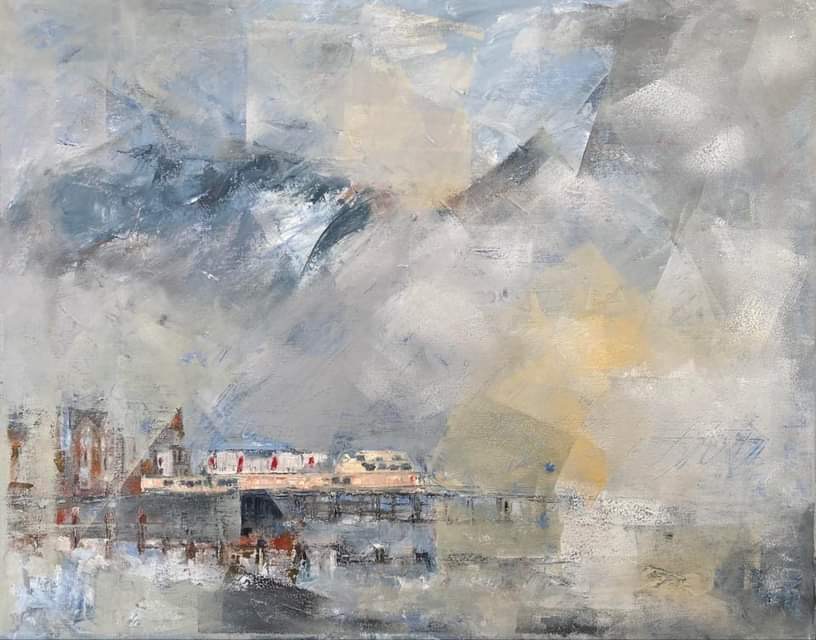 The approach to Aberystwyth from the east necessitates the crossing of twenty miles (from Llangurig onwards) of open, undulating hills sparsely dotted with signs of human habitation. These hills divide the mountains of Snowdonia to the north from the smoother landscape of Ceredigion and Pembrokeshire to the south, dissecting Wales across her lightly populated middle.

The journey is at its most glorious in winter, the hills glistening with the whiteness of fresh snow. For me, the destination is a coastal university town that drops to the Irish Sea with a riot of architectural fashions and people. The seafront is predominantly high Victorian, a ghost of a late 19th Century tourist boom that left whisperings of grandeur in the architecture, and at its centre, Aberystwyth’s grand pier reaches out into the relentless waves.

Pleasure piers hold a fascination for me, both as an artist, with the marriage of manufactured engineering and earthly elements, and as a studier of people, desiring both the engineered fun and the wild experience. At this moment in time, it is tired and, like the hotels and guesthouses, echoes days of sunshine, ice creams, and pleasures, now long past. However, like vinyl records, I can’t help but hope that the seaside pier will one day have its renaissance!

My painting is captured during the winter – my favourite time, as the waves drown out the squawking of seagulls, and the structures of the pier brace themselves against the harsh elements. I don’t even contemplate setting up an easel, but follow Turner’s lead with a sketchbook. Luckily, there is a strategically placed pavilion that offers just enough cover to sit with my watercolours for a time.

Drawing is fundamental to all art, whatever the discipline. It makes you look, if you do it properly, and to study your subject, you must get inside its head. I must have stood and studied the grand pier many times, yet this is my first painting of it. The sketch was drawn on a relatively calm day, with the watercolour painted straight onto paper with no pencil (drawing doesn’t dictate the use of pencil) and the time period was decided by the attention span of a small terrier, apt to make mischief when bored.

The sketch sat in my plan chest for two more years of visits to the pier, each time making mental notes and repeatedly taking the same photograph from a slightly different angle. A visit in December gave me the sounds – the sounds to put into the paint.

The most difficult part of the artistic process is bringing the art piece to life – it is as precarious and ephemeral as conception, and its individuality and ability to communicate can be wiped out with just an overenthusiastic sweep of the brush or carve of the palette knife. I started with an accurate drawing, taken from a photograph, the purpose of which was not to collect a photographic representation, but because I knew if I messed up the proportion now, it would greatly irritate me later on.

When I transfer the drawing to canvas, I have an essence in my mind that is neither the sketch nor the drawing, but is an intuitive feeling formed from a combination of the sketch, the reference photograph, the experience of standing on the seafront, and my own identity This is the beginning. For the entire time I paint, I must be in the painting.

When approaching how to capture the sea, it’s hard not to think of the works of Joan Eardley and Dawnne McGeachy.

Joan Eardley was a Scottish artist, born in 1921, and is noted for her portraiture of the street children of Glasgow, and for her landscapes of Catterline, a fishing village in north east Scotland. She stayed at a simple cottage in the village, with no running water and no flushing toilet! Her work seems to respond to her subject rather than representing it – she painted the sea directly from its source, often strapping her easel to large supports on the side of the harbour, so that the resulting works became soaked with spray, literally including the natural elements in the finished piece. Eardley died of breast cancer in 1963.

Dawnne McGeachy is also a Scottish artist, who is currently working. She studies the forces that make waves, using mathematical equations and the Beaufort wind force scale. She sets out the working of each wave state using the scale, then paints directly on top, encapsulating the mathematics within. Her fascination with the sea began as a child, growing up on the Kintyre Cambeltown Peninsular in western Scotland, and hearing the stories of her fisherman father. However, McGeachy holds a deep fear of the sea, knowing its dangers from her father’s stories, so, unlike Eardley, most of her process takes place in her studio.